Activities on 08 September 2010 by Karen

Whether you are a visitor or live permanently in Prague, you have not seen the city until you have driven through town in an antique car. Zooming around the tourist sites, these period vehicles, which date back to the early 1920s, have become a permanent fixture of the cityscape and of course, kids absolutely love them!

It was about 5 years ago that I took my first ever vintage car ride around Prague and I was totally mesmerized. The low-lying, roofless machine, soft leather seats and wind blowing through my hair made me feel like the queen of the town. Yes, it’s a bit of an exaggeration but the moment you board one of these cars, you really do feel like the city could be yours. Now, dozens of rides later, I still get excited at the prospect of going on an antique car ride, these days mainly with relatives or friends who are visiting Prague. 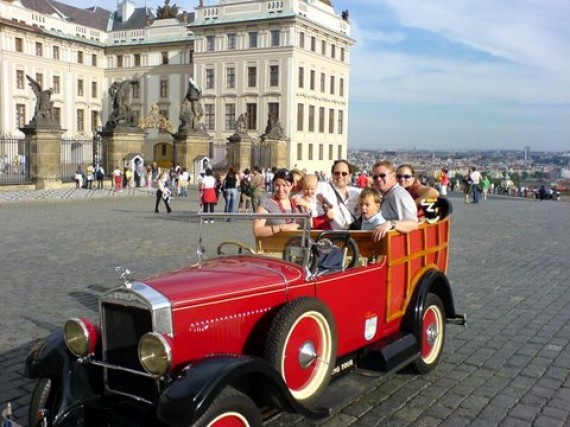 Most tours take about 45 minutes to 1 hour but the time can be extended on request. Along the way you will take in the main sites including the Old Town Square, the Jewish Quarter, New Town, drive along the river Vltava through Mala Strana and Prague Castle with its surrounds. Many drivers will stop at Prague Castle for a few minutes so that you can buy a drink or ice cream and take a few photos (if you want to include the castle, it will usually cost a bit extra).

Being in an open-roof car allows one to admire the amazing buildings which, line the cobbled streets. There are many architectural styles to appreciate and the statues, paintings and other intricate artwork which decorate many city houses are something that one often fails to notice as a pedestrian. So, don’t forget to look up as much as possible, as you drive along. People in the streets will often smile and wave at you, which is totally congenial.

Most cars fit around 4-5 passengers but if for instance, there are only 2 of you, then it is possible to have other ‘strangers’ off the street join up, should you wish to reduce the final fee. The cost is generally per vehicle, so the fuller it is, the less one pays per person. Most of the drivers/tour guides are multi-lingual, very knowledgeable and will give you a great accompanying commentary for the duration of your tour. 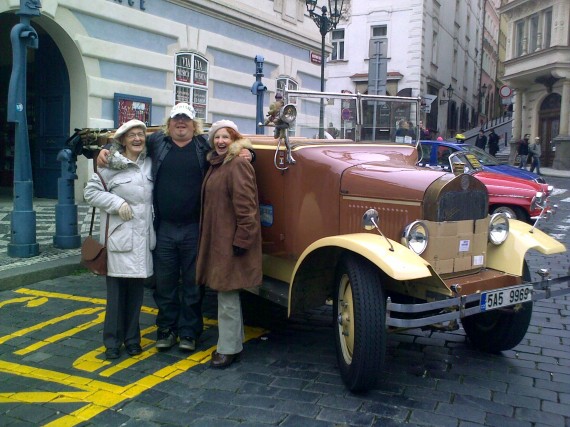 Should you have a large group which you’d like to drive around, then I must give the personal recommendation of Walter, who has one of the largest cars available that can fit up to 12 passengers. He even has a retractable roof in case it should start to rain!  If you’d like to make a reservation, you can even call Walter on Tel: 603 720 290. Walter is most entertaining and in addition to fluent English also speaks German, Italian, Russian and Polish!  Walter can generally be found in Malostranske Namesti (Lesser Town Square), next to the crossing going up Nerudova Street. This is adjacent to St. Nicholas Cathedral. You will also be able to find antique cars parked in Male namesti (close to Hard Rock Café) and at the end of Parizska Street at the point where it spills into Old Town Square (opposite St. Nicholas Church in Old Town Square). 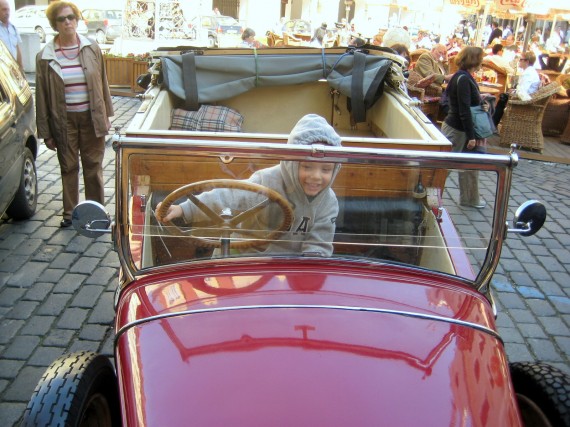 Cost: A 40-minute car ride will costs about 1200 CZK for 4 people (same price for children as well as adults). An additional fee of about 300 CZK is charged to cover Prague castle as well. This will generally increase the driving time to around 60 minutes. On the 10-seater bus the cost is 250 CZK per person for 40-minutes and 350 CZK for a 60-minute long ride.