Activities, Sports and Fitness on 06 October 2008 by Karen (3 comments)

The BMX track in Prague 8, is neatly tucked away between the forest and low-lying hills of Cimicky Haj on one side, and the outskirts of the concrete jungle in the suburb of Bohnice, on the other. This state of the art track is managed by TJ Slovan Bohnice Klub BMX. It has played host to numerous high-level races including the Czech BMX Championships in 2000, the European BMX Fall Cup as well as the international Prague BMX Cup in 2002. Several times each year, BMX fans from the Czech Republic and beyond, meet here for official racing competitions. The track is 360m long, a minimum of 5m wide, and has a total of 15 jumps. The last reconstruction of the site took place in 2004 but it is very well maintained and looked after. It is open to the general public.

Being at such close proximity to our home and having unknowingly walked straight past it a thousand times on my way to the forested area of Cimicky Haj, I was rather embarrassed that my 7-year-old boy, noticed it before I did. No doubt, it was in his self-interest to find a new and exciting place to bike ride, and so he did – on the steep bumps and jumps of a BMX track. In contrast to my own initial horror, Robbie squealed with joy as he rode up and down the bumps and around the whole track several times, without even stopping for a break.

This was the first after-school (krouzek) activity that Robbie actually chose himself. He now attends two weekly training sessions for the younger age category and just loves it. Some of the other boys in his group are quite advanced riders. During the training year (trenink in Czech), which goes on from about April-June and then again from September-October/early November, parents will often shuttle their little riders to official BMX races all around the Czech Republic.

Robbie is too much of a beginner to go to any official races, but what I really appreciated about the trainers and organizers was their cool and relaxed attitude about this. When I asked whether Robbie would be allowed to ride at the same time as the more experienced boys around his age, the trainer did not mind at all. He even lent Rob a temporary (jaw protecting) helmet from the store-room. The standard bike helmet does not offer enough protection for regular BMX bike riding. 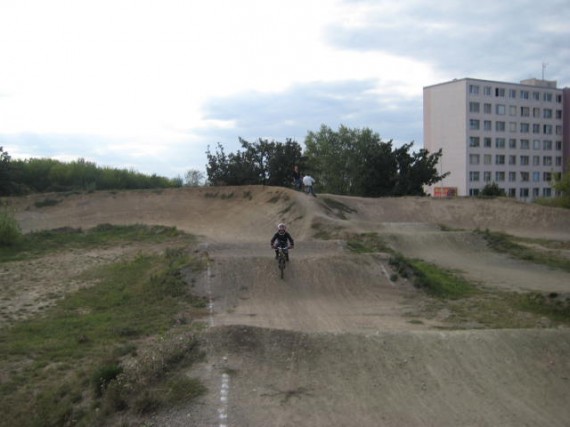 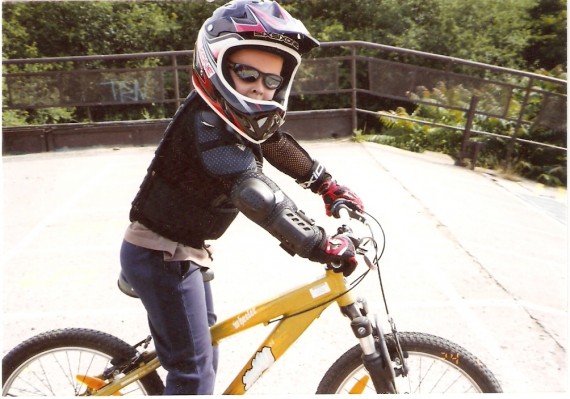 Surprisingly, the fact that Rob was only a beginner, did not make him seem to be in ‘more danger’, while riding around the other, more experienced boys. Maybe some of this had to do with the trainer, Rene Zivny. He has numerous BMX titles including 1st and 2nd place in the Czech Republic as well as world BMX Championships under his belt, and is very experienced. Rene commands a lot of authority and obviously loves the sport. The boys (and the odd girl or two who occasionally turn up), always swarm around him like bees around honey.

The weekly training sessions, are held every Tuesday and Thursday afternoon from 1630pm-1730pm for boys aged 5-11 years-old and from 1730pm-1830pm for boys aged 12 and up. The trainer gets the kids to perform various exercises and mini races around the track and the session always ends with several ‘official’ races. During this time, an automatic lifting ramp (apparently the first to have been installed in the Czech Republic), gets used to start the race and the kids just love this. It is always fun to visit the track for regular BMX riding, but the training sessions themselves make the whole thing slightly more exciting, serious and real. 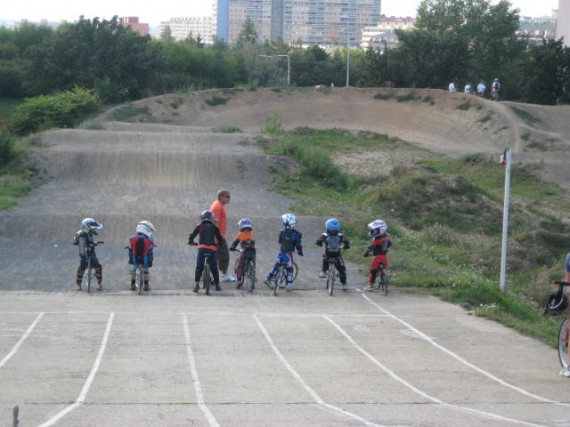 The track can be used by any one (except during training sessions) – by children or adults alike. Some children start riding when they are as young as 4 but the usual starting age for BMX is 6 years of age. The only official compulsory requirements for riding on the track are the wearing of a helmet and gloves. Once riders become more serious about the sport, it is also important to purchase proper protective clothing including a BMX helmet, gloves, knee and elbow shields as well as gear to cover their torso and back. There is a definite danger of possible serious injury in pursuing this sport, but having the proper protective clothing, significantly reduces the risk.

The BMX track is open all year round but during the winter months, riders need to use their own judgment and discretion as to whether the track is safe to ride or not. There is no fee charged for using the track. Training sessions cost CZK 1500 per person, per year and a Licence, which allows the rider to participate in BMX competions country- wide, is charged at CZK 300 (for all ages up to 18) and at CZK 600 for ages 18 and up. 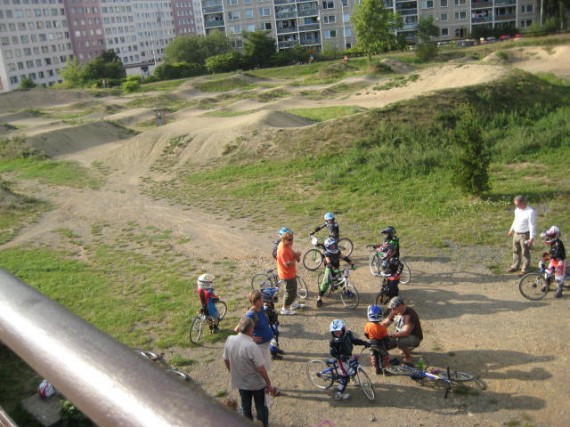 OPEN: Unlimited (except for official competion and other racing dates)

FURTHER INFORMATION: http://www.bmxbohnice.com in czech only