It’s taken me a while to write about the Boat trip that we took on the Vltava river in Prague on a beautiful Saturday last year. The truth is that I was confused as to where to begin as there are so many boating companies and time tables on offer. Now that the weather is so nice it would be a shame not to guide you through what’s available. So if you are in Prague, you really must do this with your kids. Its an unforgettable experience and its also romantic; so there is a chance that you may be kissed under the Charles Bridge. Now that would be worth it, right!

My boys were screaming with joy when they realised that they were going on a real boat and could feed the swans before we boarded.

Firstly, there are several spots in Prague where you can take a boat trip from (see end of article for other locations). We took our boat from Rasinovo Nabrezi (Rasinovo Quay). You will find it on the river bank between the famous Dancing House (at the end of Jiraskuv Bridge) and the Vysehrad tunnel (in between Jiraskuv and Palackeho bridge). The closest metro station is Palackého Náměstí on the yellow line B or Tram numbers 3, 4, 7, 10, 14, 16, 17 and 21 take you close to the location too. 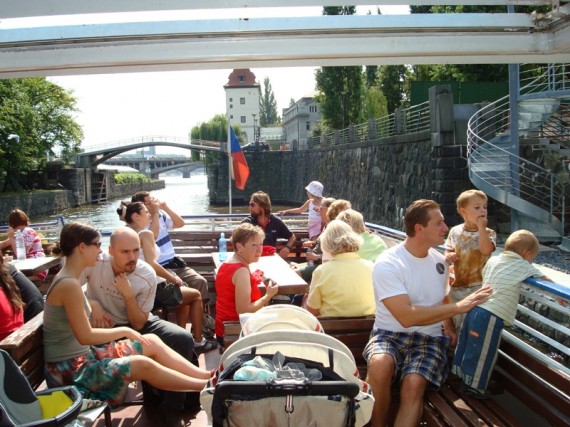 We decided to do a return trip to Troja and back. Troja is a district of Prague where the Zoo is located. Actually, many people use this boat and combine it with a visit to the Zoo. A one way ticket for an Adult costs 140 CZK. (For our return ticket we payed 220 CZK per adult.) Kids under 3 years are free and kids 3 to 12 years pay 70 CZK.

Eventually I realised this company not only provides the Boat Round Trips but also regular public transport which might be useful. Its called: Pražská paroplavební společnost meaning: First Steam-Boat Company. It holds a long tradition. It has several boats with similar capacity of people and similar services. 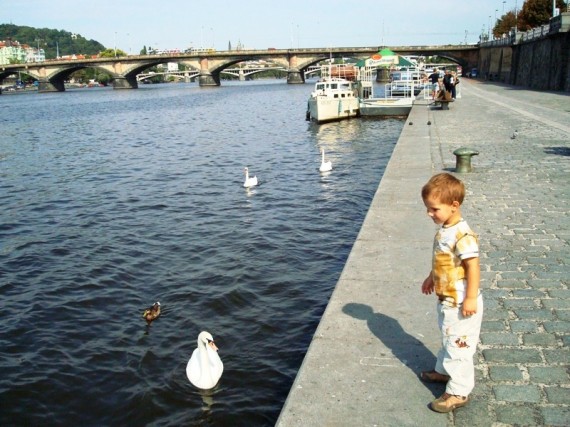 When I was a Tour Guide I used to attend some of the organised Boat trips with tourists visiting Prague, including boats that would provide dinner and musical shows. Well, this particular trip was nothing like that. If you wish for something more romantic and with food included you can investigate one of the companies that is mentioned below. Our tickets stated that there was a bar on-board the boat and since it was midday we thought we might be able to get some lunch. Well, forget it. Yes, the bar was open, but only for drinks. I have always been a chatter box and as a mother of 2 I’m ready to fight to get food for my family. So after spying a huge pack of sausages behind the bar I made the bartender warm up and sell us two sausages. But this was an exception, I speach Czech, I worked in Sales and I looked really desperate. If not for the compliant bartender my husband and I would have starved for another 3 hours. Luckily we had baby food for the boys.

So stomachs full, we could get a bit romantic and the cruise through the locks was a big success, the boys were so into it. The water pumping up and down the locks in order to get us down the river was so exiting for them. Right next to us at the start of our journey was one of their favourite playgrounds; Detsky Ostrov, but not even its presence distracted them from their river journey. 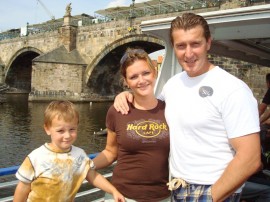 My favourite moment was cruising under Charles Bridge. I cannot help it but it is so magical going right underneath its ancient arches. It just makes you breathe a bit lighter. Did you know the theory that the bridge’s base pylons consisted of mortar mixed with eggs? This theory was only recently proved correct. So it’s no longer legend, but historical fact.

Charles Bridge was built by Emperor Charles IV in 1357. The construction was led by Petr Parler and was completed in 1402. The bridge is 515m long and has sixteen arches. The sculptural decoration consists of 31 sculptures created between 1657 to 1938. According to legend, Petr Parles suggested to add the eggs to the mortar to make the bridge stand firmly against the onslaught of flooding. He asked all the towns in the Czech land to deliver as many eggs as they could. A funny story is that the townsfolk of Velavry sent a whole cart of hard boiled eggs - just to make sure they wouldn’t get broken on the way. 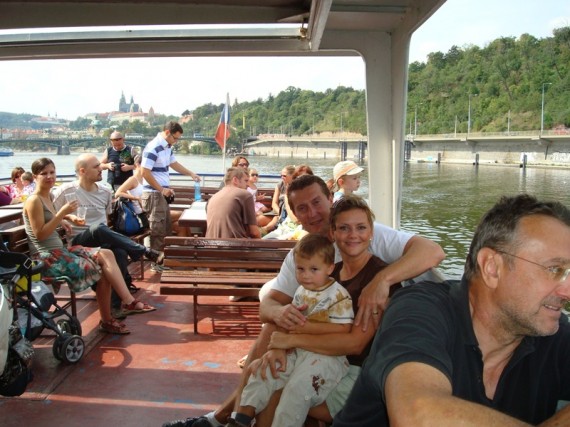 Back to our trip. We continued towards Troja, an upscale district with beautiful houses, the Zoo, Botanical Gardens and Troja Chateau. When we docked in Troja we had had a few minutes to visit a little museum built in the shape of a wooden Trojan horse. It wasn’t glamorous but it was a nice ‘cherry’ which added to the trip. We all so enjoyed the freshness of the river and on the return journey Nikki was soundly asleep in his pram and Markie was quiet observing the landscape. 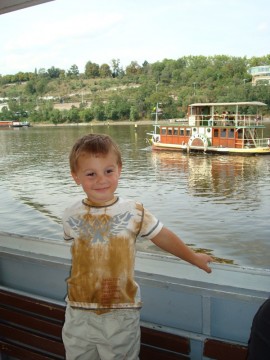 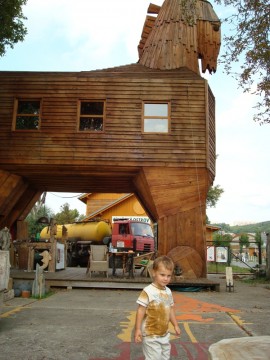 This must be the most enjoyable way of how to get to the Zoo from the city centre rather then by car. All I can say is Do it, do it, do it!

Below, as promised are a list of cruising opportunities. Whatever your heart desires be it an evening blues music concert cruise, a cruise with lunch or a cruise with dessert and coffee. Suit yourself and have fun cruising the beautiful river and city over summer.