Restaurants and Cafes on 14 October 2009 by Karen

Thirty-eight years after it first came into existence in London in 1971, the Hard Rock Café has finally opened its doors in Prague too! As most of you will already know, the Cafe has nothing to do with ‘Hard’ Rock at all - just good old Rock ‘n’ Roll and great American diner food to boost.

Prague’s Hard Rock Café is just a few minutes away from the Astronomical Clock (Orloj) in Old Town Square and situated in the historical neo-Renaissance ‘JV Rott’ building. This used to be Prague’s first ever department store and was later converted into a hardware shop. 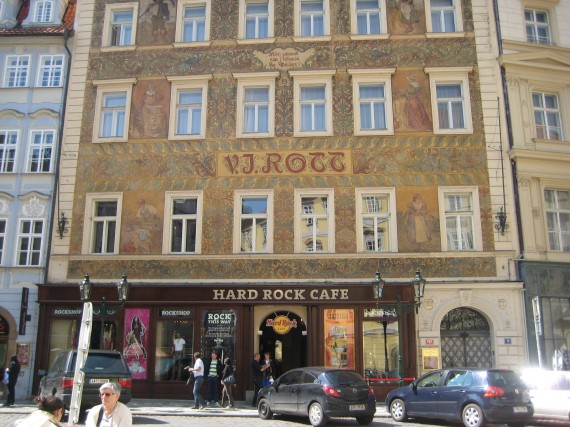 Being one of the largest Hard Rock Cafes in the whole of Europe (able to seat up to 600 people), it is spread out over 3 separate floors. The showpiece is a giant guitar ‘chandelier’, made up of tiny glass balls, which is suspended above the ground-floor bar from the ceiling window high above. This gives the whole area an incredible sense of light. 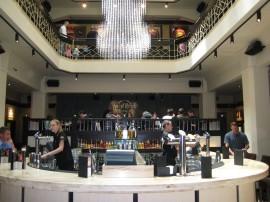 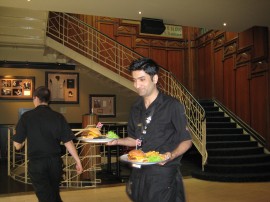 Kids are well catered to. Each child receives their own Kids’ Menu, with a large colouring and puzzle section as well as crayons . All children also get a special application form to join the ‘Young Rockers Club” (Klub Malych Rockeru), which (once they get their little card) will entitle them to a free Hot Fudge Sunday in any Hard Rock Café across Europe. 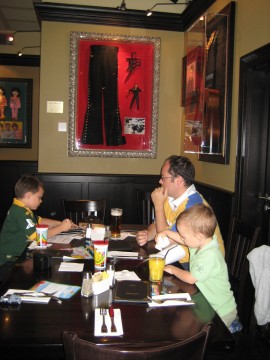 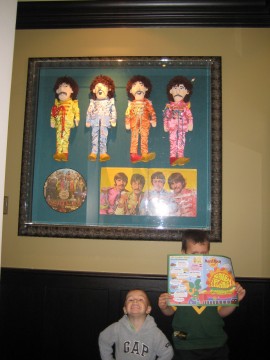 The ‘Lil’ Rocker Menu’ (for ages 10 and under) is priced at 150 CZK and comes with a kids’ drink (all sorts of soft drinks plus orange and apple juice or milk) served in a plastic, take-away souvenir cup. The kid food choices include Macaroni and Cheese with Garlic Toast, BBQ Chicken Drum Sticks, Oven Roasted, Chicken Salad, Chicken Tenders, Hot Dogs, Cheeseburgers with chips and Pasta with Red Sauce. On the weekends there is also a face-painter for the kids. 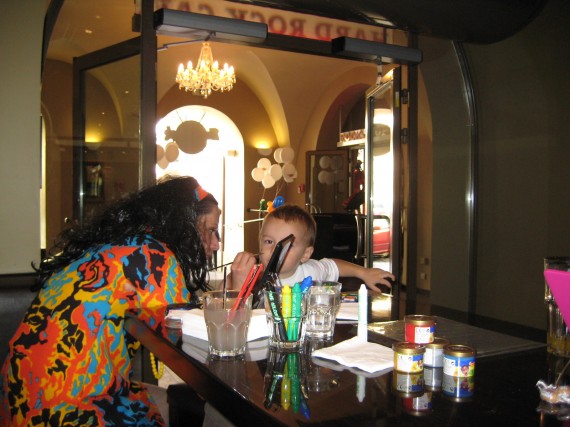 The food for adults is similar to that of the kids- typical American style with choices of burgers, salads, ribs (my favourite) but also chicken, fish, nachos and fajitas (ranging in price from about 200-500 CZK). There are also great (alcoholic and non-alcoholic) cocktails to choose from and they can be bought together with the traditional souvenir glass which has ‘Prague’ written on it. 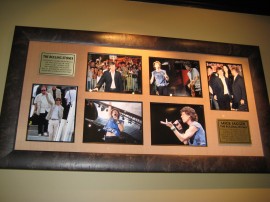 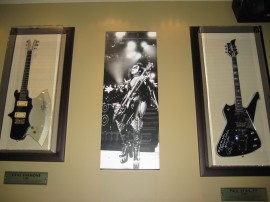 The Hard Rock Café is really all about tradition. The food and surroundings are uniform all around the world. We love coming here for several reasons. Firstly, it’s a great way to introduce your young ones to Rock and Roll music and MTV, which whether we like it or not, it is a part of life as we know it. Secondly, it’s like a little Rock Museum and the various memorabilia items displayed on the walls are a lot of fun for kids to look at. In Prague, some of the highlights include: U2 Bono’s jeans, a feather boa of Gwen Stafani or John Lennon’s denim cap. The third reason why we like the Hard Rock Café is that even if our kids happen to be loud or in a foul mood, the music all around ensures that they are never a nuisance to any other people in the vicinity! Oh, and actually there is a fourth reason, and that is the food. It’s really yummy and the HRC ribs are the best in town! 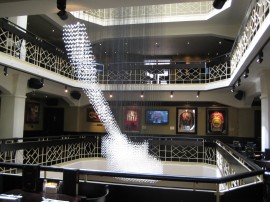 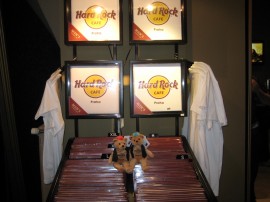 Naturally, in the evenings, the HRC caters more to adult folk and turns into a hip bar with live music starting from 8pm on Wednesdays, Thursdays and Fridays. Happy Hour is from 5-8pm. 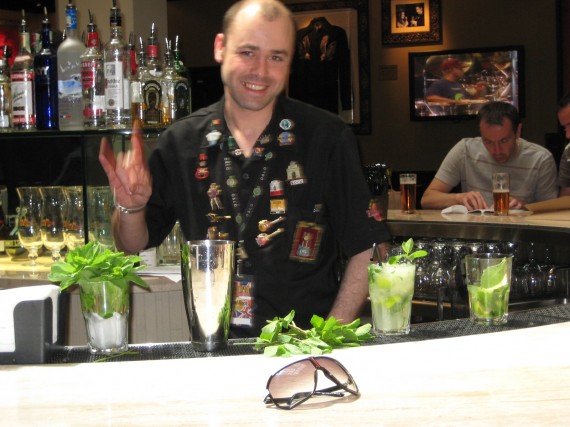 For people with babies, there is a large marble table available for changing nappies in the ladies’ toilet on the second floor.

Also, the large Rock Shop to the left of the entrance, offers a great range of HRC merchandise with “PRAGUE” plastered all over it including T-shirts, caps, magnets, key-rings, teddy bears and lots more, which are good as souvenirs for people living over seas.

If you have visitors, I can also thoroughly recommend taking a 45-minute-long car ride around the city in one of the many antique tourist cars, stationed in the square near the HRC. 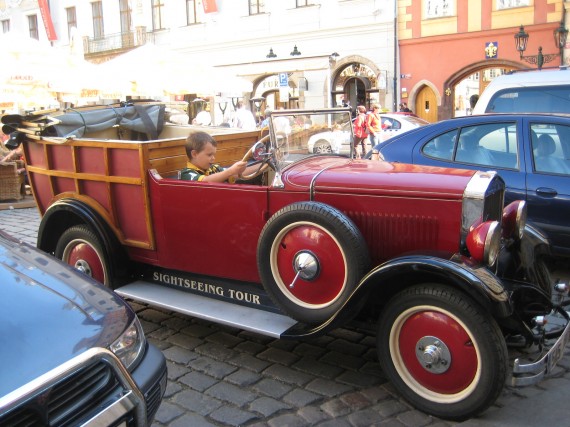 Should you be interested, then here is some HRC history for you as well:

Hard Rock Cafe is a chain of bar-restaurants founded in 1971 by Isaac Tigrett and Peter Morton. The first Hard Rock Cafe opened near Hyde Park Corner in London. In 1979 the cafe started covering its walls with rock ‘n’ roll ephemera, a tradition now extended to the other establishments of the chain. The company was sold to the Seminole Tribe of Florida in 2006. There are currently 124 Hard Rock Cafes in over 50 countries around the world. There are also HRC casinos and Hotel Resorts.
Hard Rock is known for its collection of rock and roll memorabilia. The cafes solicit donations of music memorabilia but also purchase a number of items at auctions around the world, including autographed guitars, outfits from world tours and rare photographs are often to be found mounted on cafe walls. The collection began in 1979 with the gift of an un-signed guitar (a Red Fender Lead II) from Eric Clapton, who was a regular at the first restaurant in London. This prompted Pete Townshend of The Who to give one of his guitars, also un-signed with the note “Mine’s as good as his! Love, Pete.“Hard Rock’s archive includes over 70,000 items. (Source: Wikipedia). 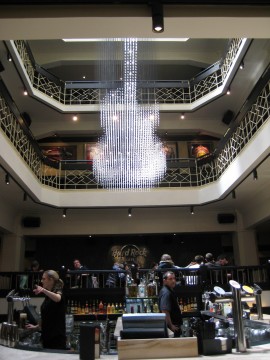 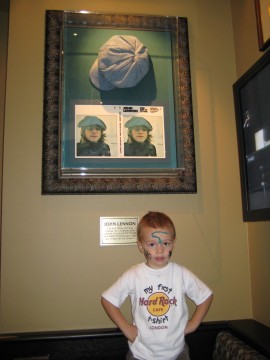 DIRECTIONS: By Metro: Green Line A to Starometska or Mustek. Also, the Yellow Line B to Namesti Republiky or Mustek. Walk towards Old Town Square and the Astrological Clock/Orloj (about 10 minutes) and then to Male Namesti which is to the left of Orloj. It’s about a 10 minute walk from each Metro Stop. By Tram: no 17, 53 & 133 getting off at ‘Pravnicka Fakulta’, walk down Parizska Street to Old Town Square and Orloj and then onto Male Namesti. By Car: the closest paid parking available is at the Intercontinental Hotel or behind the Law Faculty – both close to Pariszka Street or alternatively at Kotva Shopping Centre, near Namesti Republiky.