Just over 1 hour from Prague the chateau at Detěnice has daily Knight’s Tournaments (except Mondays) throughout July and August. This is a professionally run show complete with tents, flags, shields, horses in costume, a jester, a ringmaster and of course the magnificent knights in full armour. We made the trek out here on a Sunday - learn from our mistake and come out on another day.

The castle has Fairytale Sunday’s for little kids in the castle gardens so the whole place was quite crowded. We also had to put up with a grumpy 4 year old that could not last through the almost 2 hour show, my daughter (7) in comparison, was captivated and really enjoyed the performance. The show is very entertaining for adults but I think kids need to be at least 6 years old to last the distance. 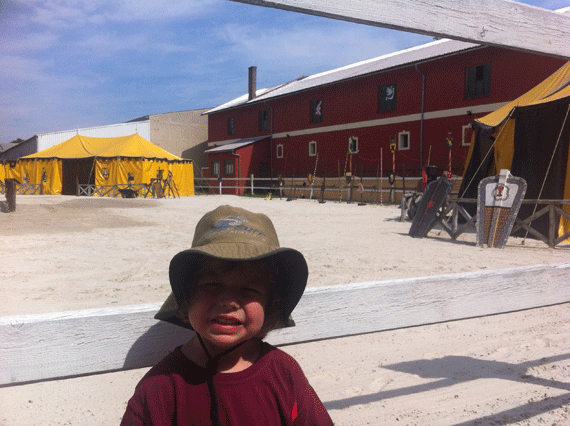 So I thought both my kids would get a kick out of this, some medieval jousting, battles on horseback, sword play etc. in the grounds of a castle, unfortunately the little one (4) was just too tired after the half-time break in the performance and we had to leave before the show finished. A big tip, get there early and make sure you have seats in the covered stand. Here you have shade from the sun and all the action is directed towards the stand. 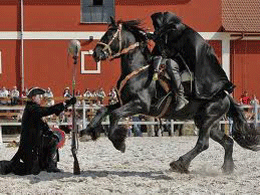 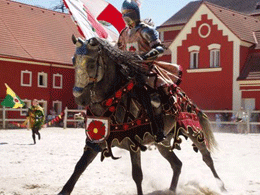 The stand is divided into sections marked with ribbons indicating a colour - you then become the cheer squad for a particular Knight - eg. green and you’re Polish, Blue is Czech, Red French and Black German! 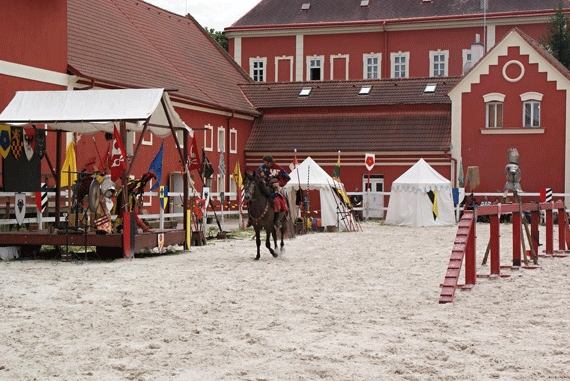 The German knight is the most impressive, massive antler horns protrude from his helmet - he is extra scary in costume and manner yet his skill is unrivalled and humour starts to play between him and his rivals. Obviously, being a Czech speaker or understanding some Czech really helps as there is quite a bit of spoken joviality between the rivals and their ringmaster. Mainly there are great disputes around the awarding of ‘points’ (bodu) for each of the challenges, obviously each Knight thinking they were better than the other. 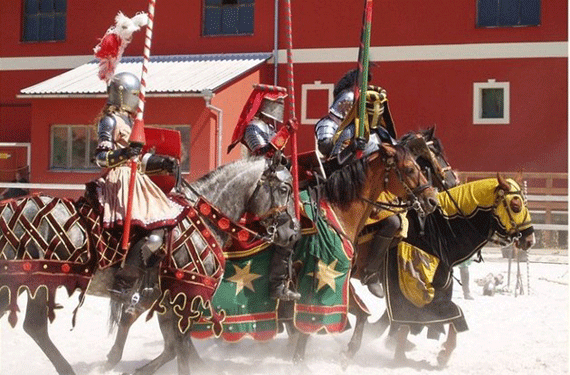 The show isn’t cheap, we paid 195czk per adult and the kids were 95czk each as they were over 3 years old so it was disappointing when we had seats off to the side and then had to leave early. But like I said earlier, avoid weekends and stake your claim on a good seat, in the stands early and with kids of the right age and you’ll have a thoroughly good time. 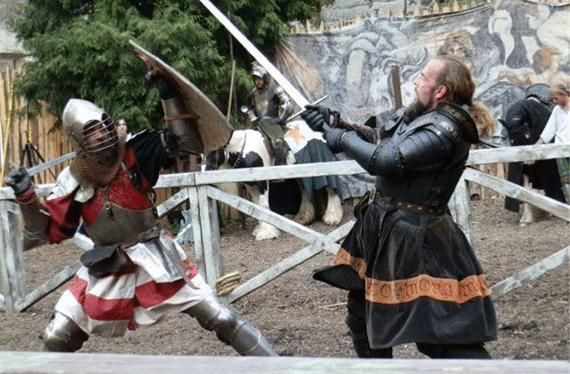 Zámek Detěnice is a privately owned chateau, the owners have carefully renovated the building, rooms and grounds. It’s quite the commercial enterprise and has transformed this once sleepy town. You can find medieval style accommodation here as well as an impressive medieval tavern complete with costumed folk serving you ‘old style’ meals. During lunch you can dine in cellar-like buildings within the castle brewery and every evening the wenches and rogues come out to serve you and cause some scenes. Snake charmers, dancers, live music, beggars, jugglers and roasted meats cooked on an open fire transport you from the 21st century. 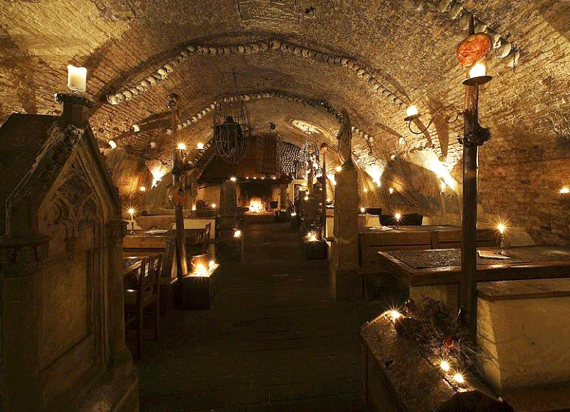 I mentioned earlier Fairytale Sunday - this happens every Sunday from 10:00 to 16:00 in the grounds of the chateau gardens. You pay a smaller fee for entry and the kids get a certificate. I should mention that this fee is in addition to the Knights Tournament ticket. The kids have to visit each fairytale character in often quite elaborate settings around the garden. The characters make the children undertake some kind of physical challenges, they then are rewarded with a stamp on their certificate. 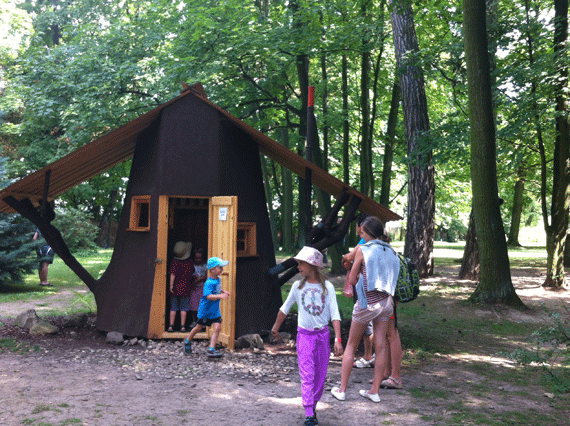 The characters are mostly from Czech fairytales - Vodník, Ježi Baba, a witch, the devil (čert) and finally Snow White allows children with their certificates full of stamps to pick a small gift from her table. My husband hated the garden area, we had a picnic here but there were lots of people walking everywhere and they piped this canned music all over the place which really disturbed his equilibrium. 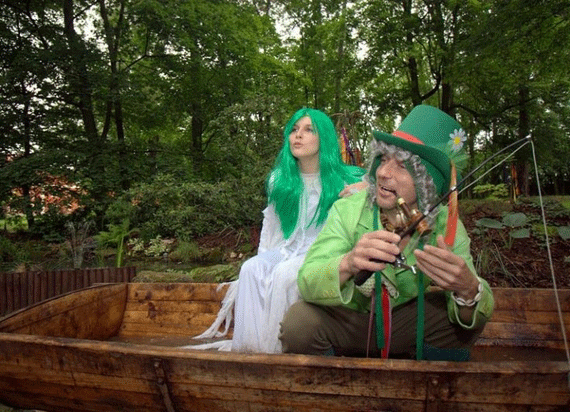 The chateau has regular tours, often led by fairytale characters. Tours can be led in English and other languages but you have to pay extra for this. On the ground floor of the chateau is a Cukrána - they serve coffee, cake and a big range of nice looking Icecream Sundays (Pohár) in a lovely shady lawn with plenty of tables. There are also some swings, a trampoline, skittles and some smaller toys for younger kids. 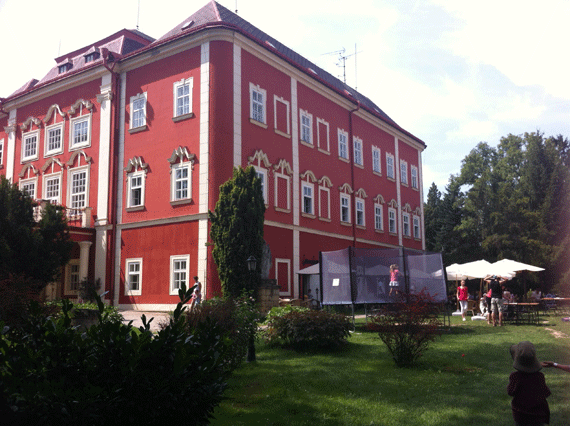 So if you want to experience something of the past and have guests from overseas wishing to step back and witness chivalry, games, food and fun times from the past then I think a visit to Detěnice could be the answer. 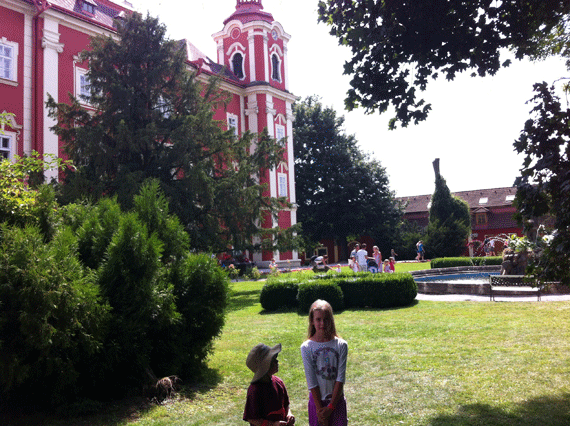 OPEN: Chateau and Restaurant open daily over Summer. Please consult website below for specific times and opening hours outside of the Summer months.

KNIGHTS TOURNAMENT SEASON: July & August at 14:00 every day except Mondays