Activities, Sports and Fitness on 04 November 2010 by Karen

Many Czechs are totally and completely ice hockey crazy. The Czech National Ice Hockey Team currently (2010) holds the World Ice Hockey Championship trophy, and world-renowned players such as Jaromír Jágr and Domink Hašek (The Dominator), have made their fame and fortune on both the domestic and lucrative international stages.

My 9-year-old son is a huge fan and during the winter months, regularly attends live hockey matches with my husband. Since we live in Prague 8, the ice hockey team that we support (with its base in nearby Prague 7) is called HC Sparta Praha. This year we have even bought season tickets, which allow us to attend any of the matches which Sparta plays ‘at home’ at the Tesla Stadium in Prague 7, for free. 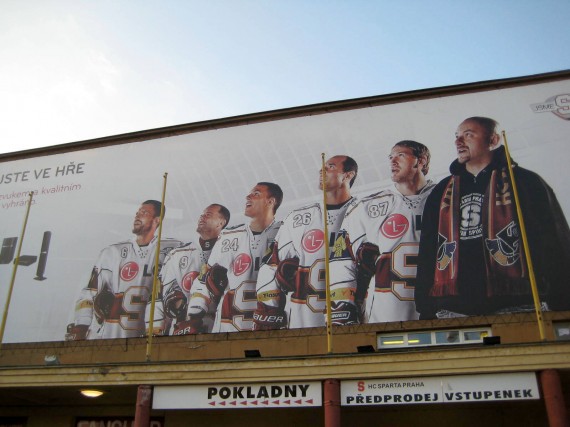 Recently, when my husband was away from town on a business trip, I got the ‘honour’ of attending my first-ever ice hockey match with Robbie. I must admit that my expectations were quite low to start with but I was pleasantly surprised by just how much I ended up enjoying myself! The atmosphere was almost carnival-like and the whole evening ended up being a great mother-son bonding experience as well. 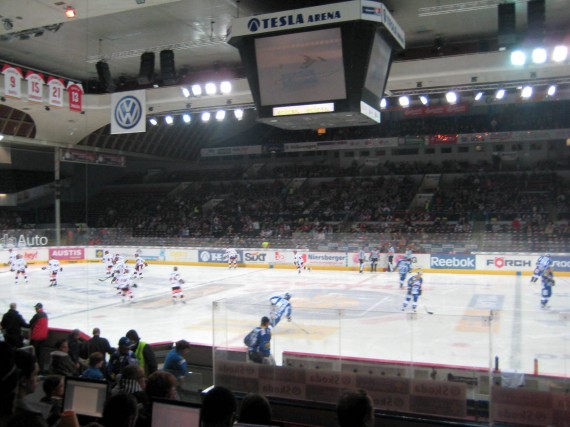 There were cheerleaders, Sparta’s team mascot, called ‘Spartik’ (cartoon imitation of a Spartian soldier) running around the spectator stands, lots of music, lights and action throughout the almost 2-hour long spectacle. Supporters of both teams dressed in their respective team colours were equipped with streamers, drums and vuvuzelas that added lots of ‘spirit’ to the match.

The opposing team on the night came from Brno, and had a relatively small but extremely vocal Fan Club in the stands! In fact, as we walked towards the stadium before the match, we saw several Blue Kometa Brno busloads arrive in the parking lot, full of energy, song, fan paraphernalia but most of all a love for hockey. It was all in good sportsmanship. On the night, Sparta ended up losing 2-3 but I was kind of (secretly) pleased (my son would kill me if I told him), that the Brno people hadn’t driven for over 3 hours to Prague ‘for nothing’. 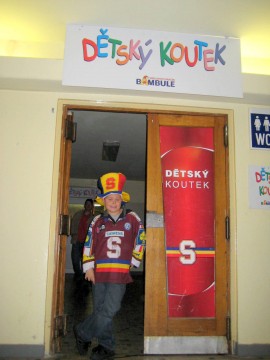 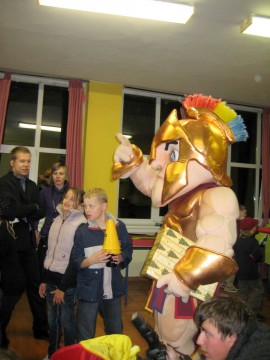 Whether you’re a regular ice hockey person or not, if you’d like to take your kids to a match here, then this is how it works. Most games fall on either a Tuesday, Friday or Sunday and generally begin at 6pm. Each match is divided into 3 separate parts which last for about 20 minutes each (plus any extension time). At the end of each session of 20-minutes of play, there is a break that lasts about 15-20 minutes. There are plenty of refreshments that you can get during this time. At Tesla Arena, there is also a Kids’ Corner (or Detsky Koutek), which has full-time staff that will keep an eye on your children for about ½ hour before the start of the game until the final end of the match. During half-time, the Kids’ Corner also gets visited by ‘Spartik’, which is HC Sparta Praha’s mascot. During our visit, ‘Spartik’ was almost ambushed by all of his young little fans (see photo). 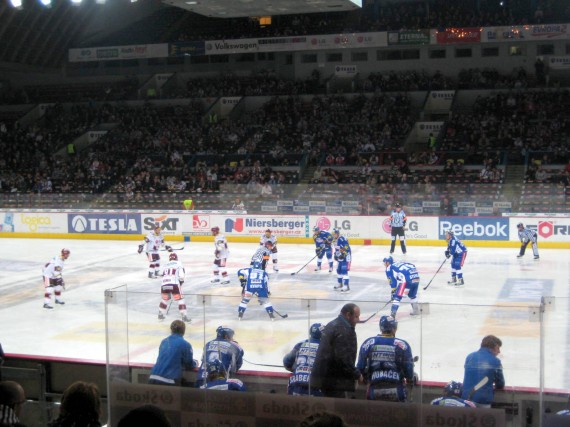 Overall, expect to spend approximately 2 hours or so at any hockey match that you may choose to attend. During the ice hockey season, which starts around September and goes on for more than 6 months, each week, dozens of matches get played in all of the main cities all over the Czech Republic.

There are various teams and leagues but the main one to follow nationally as well as in Prague is Tipsport Extraliga. This is an annual championship, with a total of 14 national teams competing for the prestigious Tipsport Extraliga Cup. In Prague, there are basically 2 local teams (both competitors in Tipsport Extraliga) that one can follow. Namely, HC Sparta Praha and their arch-rivals, HC Slavia. 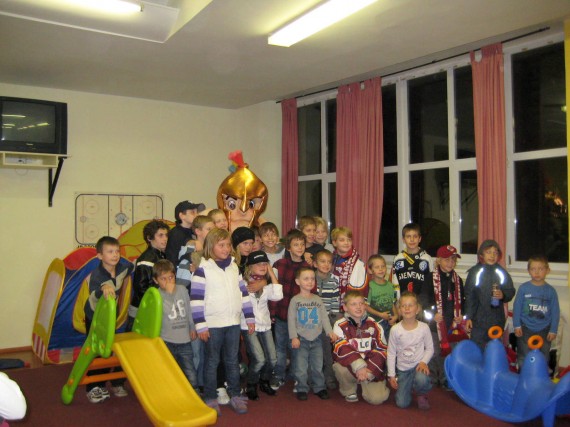 If you’d like to see an ice hockey match in Prague, all you need to do is look up either Sparta or Slavia’s respective websites which will give you the dates of their ‘At Home’ matches – ‘At Home’, meaning that each team is playing in Prague. The easiest way to get tickets is on the day, shortly before the match begins. They range in price from about 50-300 CZK, depending on where you choose to sit. HC Sparta have their ‘At Home’ base at Tesla Arena in Prague 7. HC Slavia’s ‘Home’ is the ultra modern and beautifully appointed O2 Arena located in Prague 9.  It also has a kids’ play area (Detsky Koutek) with full-time minder. Incidentally,O2 Arena is also where the 2010/2011 USA NHL ice hockey season got kicked off this year (October 2010).

So, if you’re at a loss about what to do with your kids (especially the boys) this winter, then why not take them to an ice hockey match in Prague? You may even become a fan yourself! 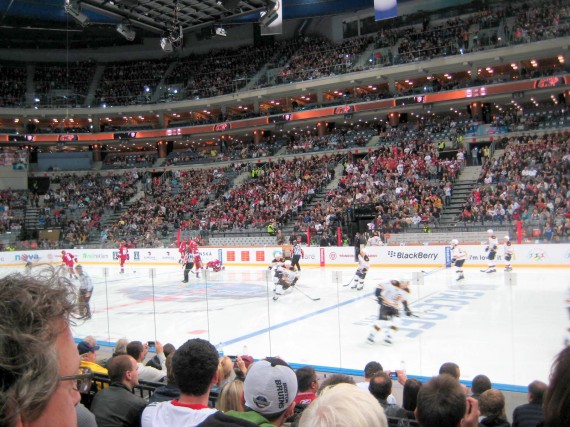 CONTACT: Email: .(JavaScript must be enabled to view this email address)

TICKETS:Ticket prices range from 80 to 190 CZK. Children under 145cm get in free.

MATCHES: Click on http://www.hcsparta.cz / Zapasy (matches) / Zapasy Sparty - this will show you all the dates of upcoming matches from now until 20.2.2011.

DIRECTIONS: TESLA ARENA: By Metro: Take the Red Line C to Nadrazi Holesovice. The stadium is less than a 10 minute walk away. By Tram: Take Tram No’s: 5,12,14,15 and 17 to Vystaviste. By Car: Paid parking is available directly in front of the arena.

TICKETS: For HC Sparta Praha: Ticket prices range from 80-190 CZK. Children under 145cm get in for free. For HC Slavia: Prices range from 100 CZK - 350 CZK depending on the seats. Children pay 20 CZK for some categories.

TICKET PRE-SALE: All tickets can be purchased at any SAZKA agency found all over the city of Prague as well as in O2 Arena.

DIRECTIONS: O2 ARENA: By Metro: Take the Yellow Line C to Ceskomoravska. By Car: Paid parking is available next to the arena.