Playgrounds, Restaurants and Cafes, Activities on 08 July 2010 by Karen

Considered to be the highest hill in Prague, it even used to be called a “Mountain” in the past. The word Petrin has its origins from the Latin word for “stone” and between the 12-14th centuries it served as a place for executions. These days, it is used for much more pleasant pursuits and makes for a truly charming morning or afternoon out with or without your young ones in tow.

4-year-old Albie and I spent a lovely day here recently but since it was a sunny Saturday morning, we had to wait for almost 40 minutes to get on the cable car which got us to the top of the 510 metre tall hill. On ‘normal’ days it takes less than 10 minutes to ascend with the 2-car funicular railway. Tourists outnumbered local folk by a ratio of about 1:10 but a mixture of lollipops and sweets kept little man surprisingly quiet for the duration of the wait. Although it is possible to get to the very top on foot, I would only recommend this to the very, very fit and definitely not if you have to lug a buggy or pram as well. Once you have finished your activities at the top of the hill, then walking back down again is the way to go! 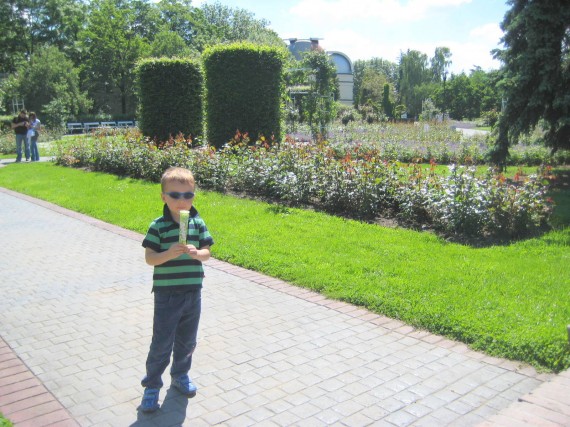 At the top of Petrin, you will be greeted by an ice cream seller and a group of people offering children assisted rides on ponies and horses (starting at around 40 CZK for a walk around the marked grass area). 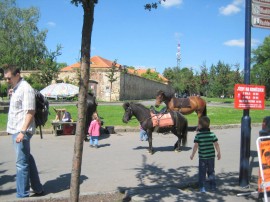 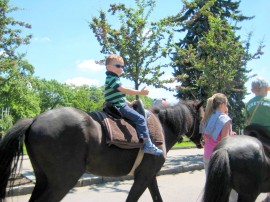 If you veer towards the left, you can take a walk through a beautiful rose garden (not always in bloom) which leads to the Stefanikuv Observatory (Stefanikova Hvezdarna), named so after a famous Czech pilot and astronomer. On cloud-free days (at a nominal fee), one can even go inside and look at the sun’s rays through the observatory’s special telescope. 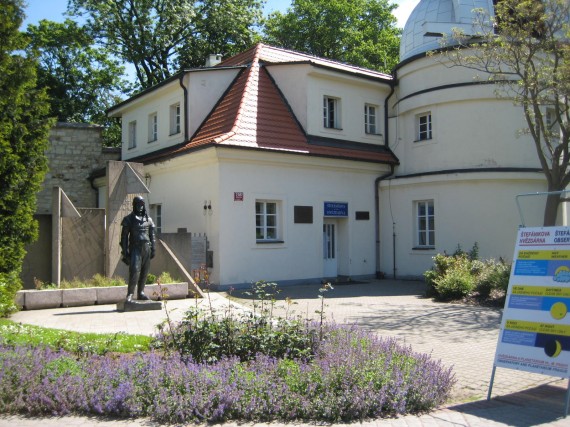 As you move closer towards the famous “Eiffel” Tower”, you will come across a small but fun little playground for kids. It is located to the left of the main “Hunger Wall” (Hladova Zed) entrance to the Tower. During the reign of King Charles IV, unemployed and “hungry” workers were employed to construct a wall (completed in 1361) around the castle and to fill their hungry stomachs the labourers were paid with daily portions of soup – hence the word “Hunger Wall”. 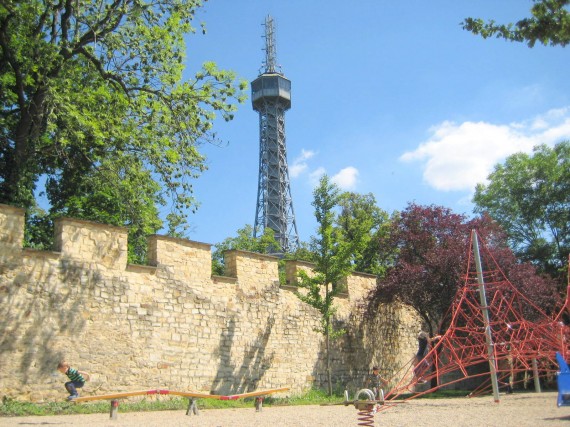 A total of 299 steps will take you to the top of the Petrin Viewing Tower, which offers stunning 360 degree views of the city. There are 2 separate stairwells- one for people going up and the other for those descending the tower, which avoids unnecessary crowding of the stairs. Unfortunately, there is no lift (except for handicapped visitors). 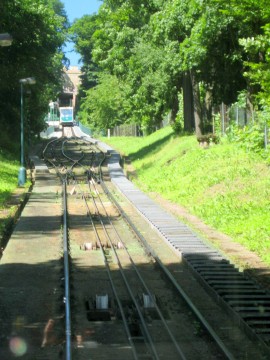 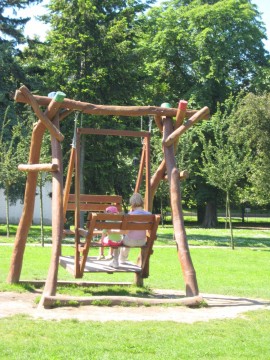 Petrin Tower is often called Prague’s Eiffel Tower, as it was indeed built only 2 years after its famous mother in Paris, at a ratio of 1:5, commemoratating the opening of the 1889 World Expo in the French capital. It was built by the Czech Club of Tourists (klub českých turistů). If you have time, it’s kind of fun to also pay a visit to the small museum at the bottom of the tower, which houses a compact, permanent collection of curios gathered in Prague over the last 120 odd years. There is an entrance fee which has to be paid for the privilege of going up and down the tower.

Leaving the “Eiffel” Tower behind, you can stroll further down and on your right, admire the lovely baroque church of Saint Vavrince. Built in an area which was frequented by religious pilgrims for hundreds of years, it stands directly opposite to the much overrated Petrin Maze (bludiste). Yes, there are a few different types of mirrors scattered about, some of which to the amusement of some children, distort your body shape, but the whole place feels like it hasn’t been modernized in the last 30 odd years. It’s worth a visit only for nostalgic reasons (and perhaps the 3D portrait of the battle of on Charles Bridge between Protestant and Catholic forces in 1648) – the entry price is definitely bad value (and I don’t say something like this very often) for money. 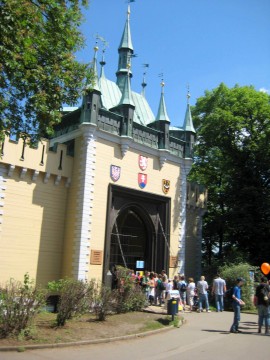 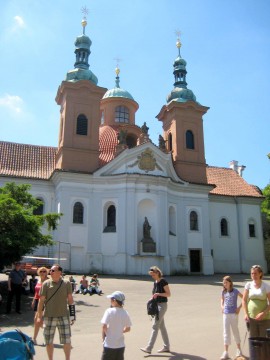 After you have strolled around Petrin Hill long enough, and provided that you have enough time, rather than returning with the cable car, I would very much recommend that you walk instead. There are basically 2 routes that you can take. If you’d like to take a walk towards Strahov and Prague Castle, then you need to turn in an easterly direction. To go back to the bottom of Ujezd (along the cable car route), then you need to veer west. This is the way in which Albert and I walked this time. The descent is a little bit steep at times but the walkways are asphalted, which makes for very comfortable walking even if you’re coming down with a stroller. 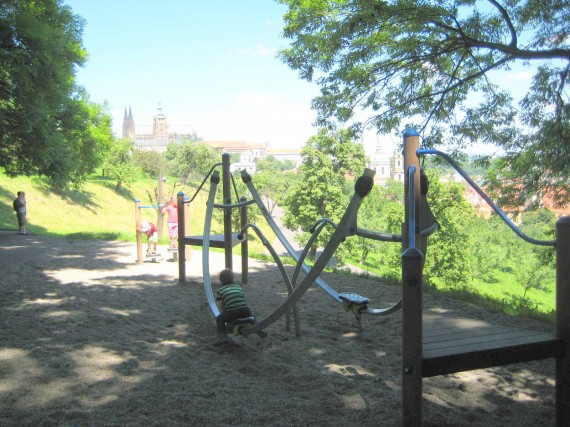 From Spring to Autumn, you will find yourself surrounded by beautiful and lush foliage, especially at the top part of the hill, where the trees grow together quite densely - a great respite on a hot day. You will also come across a charming little coffee shop complete with tables, chairs and even a fountain. This makes for a wonderful stop with again, one million dollar views of Prague. 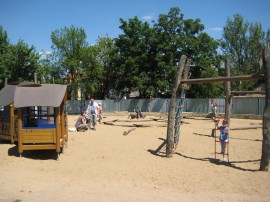 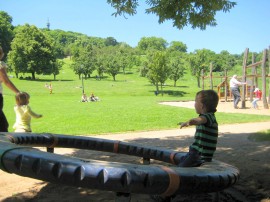 About half-way down the hill, there is another small playground with benches (surrounded by trees and bushes offering great shading from the hot sun) and a spectacular vista of St. Vitus Cathedral. At the very bottom of the hill, shortly before you get back to the tram stop at Ujezd, you will find the largest playground on the whole of Petrin Hill filled with lots of modern equipment for kids to go wild on. 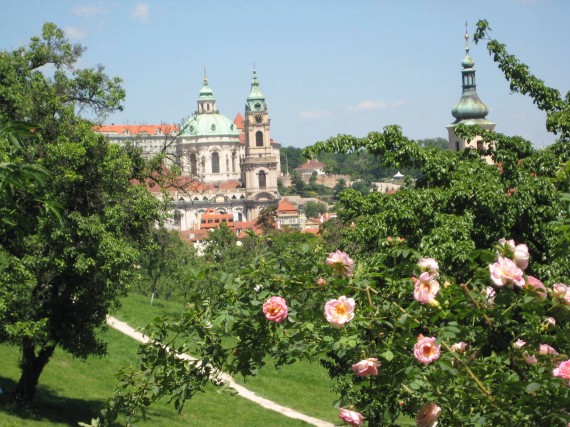 COST: You can use a normal public transportation ticket which can be purchased at any newsagent or metro station around Prague. The cost is 26 CZK per adult. Tickets can also be purchased at the Funicular itself.

INTERVALS: October – April: the funicular leaves every 15 minutes. May – September: once every 10 minutes.