For the more adventurous families, a very good day out, or weekend break if you prefer, is a trip to the Prachovské Skály, (Prachov Rocks), about 10 km northwest from Jicin - One of the most popular sandstone rock ‘towns’ in the Bohemian Paradise, the area is a hevily-segmented plateau created of sandstone sediments during the Mezozoic Era. The original plateau was fractured by volcanic activity sometime during the Cretaceous Preiod. Subseuent wind and water erosion has sculted the rocks into the formations that visitors see today.

Danny, Chris and myself decided that it would make a nice weekend break in May, so we decided to stay at a campsite near the Skály in a village called Jinolice. Sited next to a series of small lakes, the campsite provides small chaty, or huts for visitors, as well as basic cooking facilities, a toilet & shower block, and a restaurant. Nearby, you’ll discover other campsites with more restaurants. 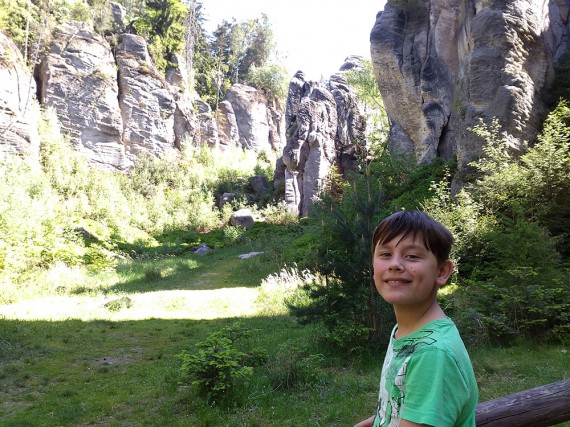 Having no car, we travelled by train with our bikes from Praha Masarykovo Nadraži via Nymburk, where we changed trains for the local line to Jicin. After lunch we headed for the main square in Jicin, where we were fortunate enough to encounter a medieval fair. We only had time for some celtic music, before heading off for Jinolice. The 6km by bike took approximately 45 minutes along the main road from Jicin to the campsite, with a couple of rest-stops on the way. 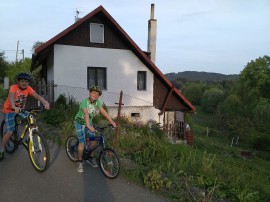 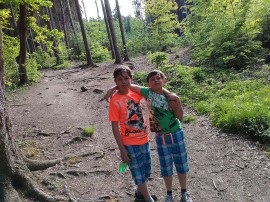 After arrival and introduction to our accommodation for the night, we explored the campsite and surrounding environs, before turning in relatively early after a long day.

The next morning we checked out of our hut before 10am. Luckily, the campsite allows you to keep any luggage in their office if you want to go exploring some more before leaving completely. So we took advantage of that service before cycling to the Prachovske Skaly ( The Powder Rocks). 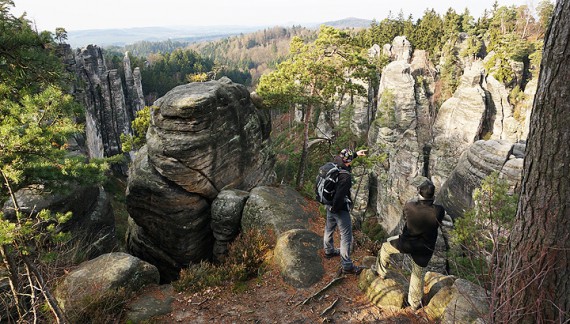 The short round tour is led through a narrow, only 35 cm wide rock gap; from there, you approach two best-known lookout points and return through the Císařská Chodba (Emperor’s corridoor) between robust rock blocks. The tour takes about 3/4 hour.
The long round will take you along seven lookout points, you climb various staircases carved in the rocks and squeeze through narrow gaps between huge stones. The tour is 3.5 km long and it takes approximately 2.5 hours. 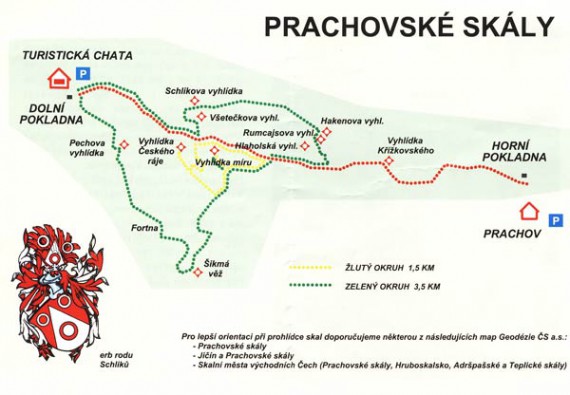 It was mostly uphill to the Skaly, but as all cyclists know, what goes up must come down, so the journey back was to be a lot more fun. On arrival we tied our bikes up in the main car-park, although there is a special place for bikes behind one of the restaurants.

Entrance to Prachovské Skály area is 70kc for adults and 30Kc for children, although we saved by buying a family ticket, which is good for up to 2 adults + 2 children. 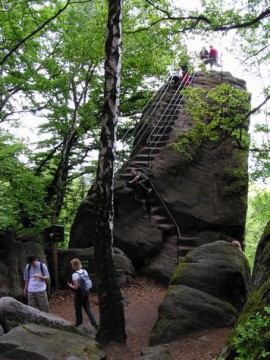 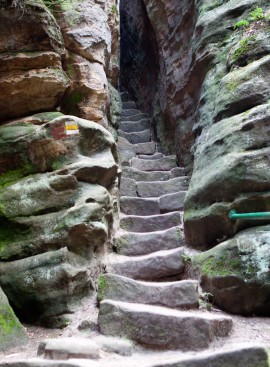 And so the hike began. It goes without saying that during warm or hot weather pack enough drinks!

CONCLUSION: For a day-trip or weekend break, if you want something adventurous for the children, scenic views and not too far from Prague, then I’d recommend Prachovske Skaly and the surrounding area.

TOP TIPS: If you go with small children, be prepared to leave the push-chair/stroller at the bottom of the stairs.

Also, try and avoid hot days in summer for two reasons; one, it’ll be very crowded, and two, it’ll be very hard-going. We found climbing around the area pretty good in mid-20’s Celcius/mid-70’s Fahrenheit.

ARRIVAL: Take the road 16 from Jicin towards Mlada Boleslav. Take the direction to Holin, pass Holin and keep driving to Prachov. Parking is either right in Prachov or just next to the Tourist hut.

ACCESS: There is a very dense network of footpath within the whole rock town. For example: You can follow the yellow marked footpath, which starts at the Tourist hut. It passes the Viewpoint of Peace and the Viewpoint of Bohemian Paradise. Then it goes back through the Imperial Corridor. It´s about 1 hour walk. There is also green marked footpath which is more difficult. It goes by more viewpoints and it leads to some remoted parts of the rock town. It is 3,5 km long.