Skiing with Kids in Janske Lazne

Weekends Away, Sports and Fitness on 09 December 2009 by Karen

In the Czech Republic, the skiing seasons begins in earnest in mid-December and wraps up towards the end of March. The spa town of Janske Lazne, is located on the eastern part of the so-called Giant Mountains, which form the highest cluster of mountains in the country. It takes about 2 hours to get there by car, if you are driving from the centre of Prague.

For 3 years now, our whole family has been coming here during Rob’s ‘Spring’ school holidays in early March, usually staying from Monday through to Friday. The advantage of coming so late in the season is that there are smaller crowds, which in turn means shorter queues for ski-hire, ski lifts, faster service at the restaurants and basically better customer service all around. The only (small) risk is not having enough snow but thanks to the invention of snow producing machines, there is always a guarantee that you’ll be able to go down at least some of the slopes. 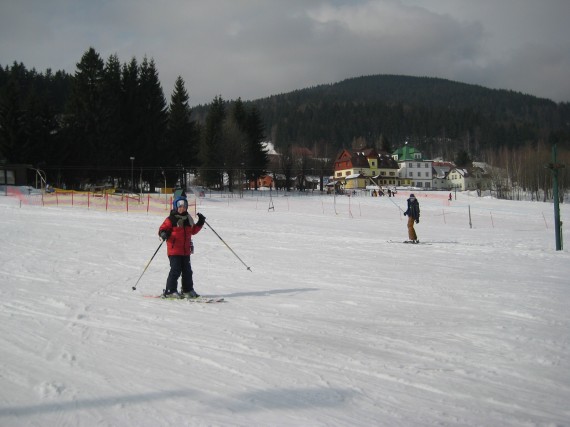 There are several ski and other winter gear hire places in and around Janske Lazne, and their prices are basically very similar and competitive. Just pick the one closest to you. All ski hire places will fit you with your skis, boots, poles, snow boards, sleds etc. 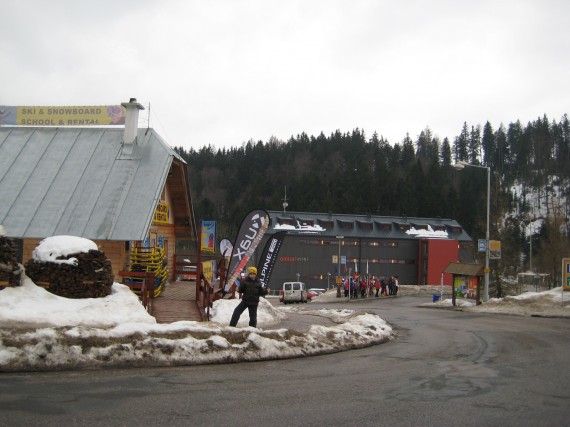 They also all have their own ski schools for both adults and children and can even organize baby sitting. The cost decreases with each additional day that you rent something out. 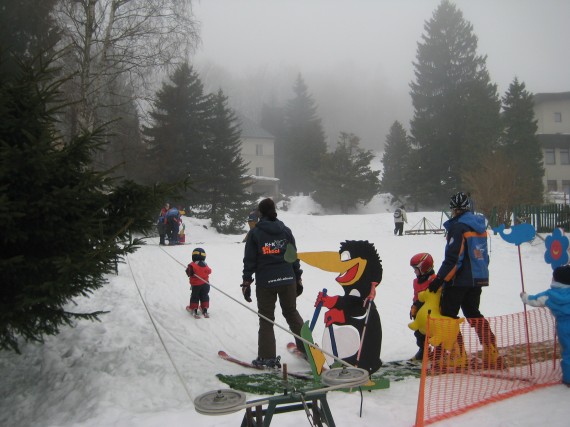 Our complete ski hire (excluding the boys’ helmets and my husband’s ski boots- as we had our own), came to a total of 2500 CZK for 5 days. We opted to take private skiing lessons, which were reduced from 350 CZK to 290 CZK per hour for a total of 20 lessons. Basically, we were able to use these for the kids as well as ourselves, in any combination that we chose. Everybody seemed to be profficient in English, German or both. 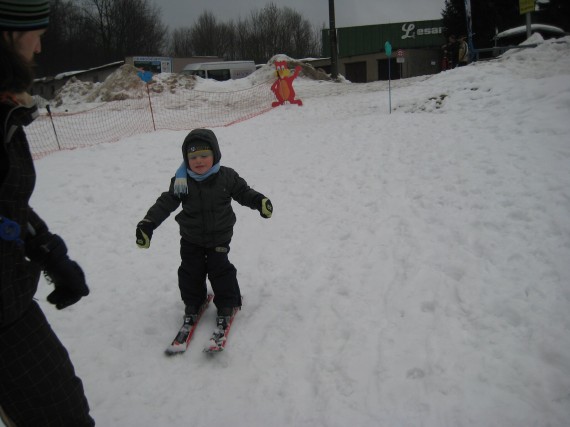 Most of our lessons were used by then 7-year-old Robbie, who by the end of the week, became quite a proficient skier. Richard and I took a few lessons each to build up our confidence. Three-year-old Albie only managed a couple of lessons on a miniature slope, but it did teach him how to break by doing a ‘pizza’ with the front of his skis. 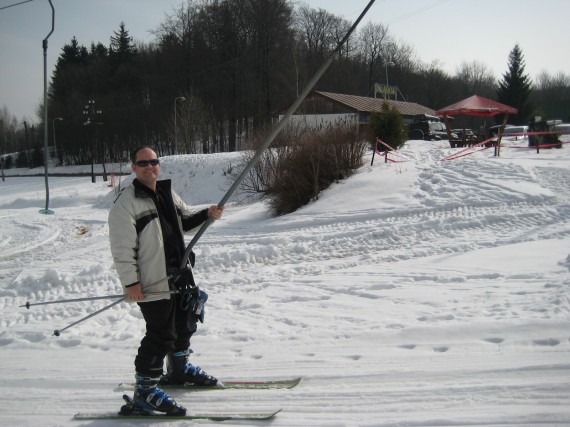 During our last stay, we chose Hotel Omnia, which is one of the most modern in the area and is right at the bottom of Cerna or Black Mountain, which stands at 1299 meters above sea level, and provides one of the longest ski slopes in the whole of the Czech Republic. 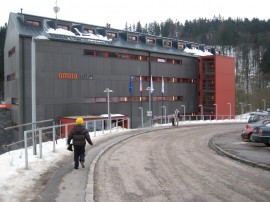 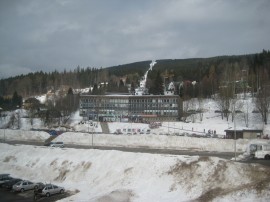 This hotel is incredibly comfortable, modern and extremely kid-friendly. There is a total of 43 double rooms and additional two to four-bed suites or maisonettes, which are suitable for families with children (up to 4 beds). We stayed in one of these rooms which had 2 beds (movable, to make a double bed or 2 single beds) upstairs, and a fold-out sofa (to fit 2 people), downstairs. The stairs were a little steep, which could be a bit challenging with an exploring toddler. The hotel has one Deluxe Apartment, which has no stairs at all. 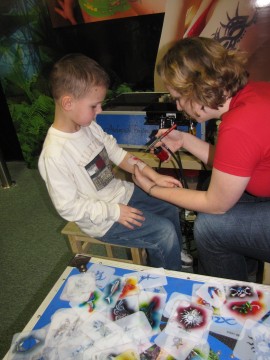 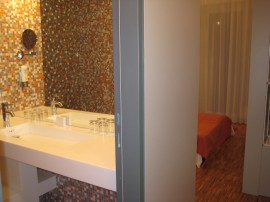 After a busy day of skiing, all of your gear including skis, boots, poles, sleds, snowboards etc were left to dry in the special drying room downstairs. Downstairs is also the place where you can work out at a mini gym, go to the sauna, solarium, a massage or just rest your weary bones in the swimming pool (29.5 degrees C). Massages cost around 450 CZK for 60 minutes. There is also an indoor tennis court which doubles up as a football field but during our stay, this room was not in use (too large to heat up for the occasional play, I suppose). 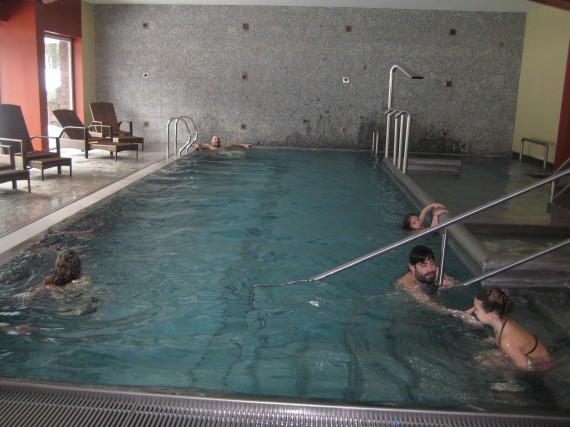 The Conference Room on the 3rd Floor, is filled with toys and remains open throughout the day so (younger) children can use it as an indoor play area. 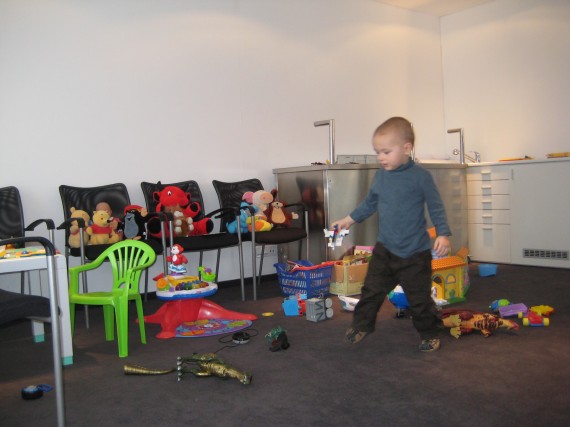 The food at the hotel’s restaurant was also delicious. A big breakfast buffet was included in the price of the room and for lunch, there was a “Quick Menu for Skiers”. Some of the dishes on offer included Quiche Lorraine (120 CZK), Snails with Garlic Butter (125 CZK) or Chestnut Soup (65 CZK). 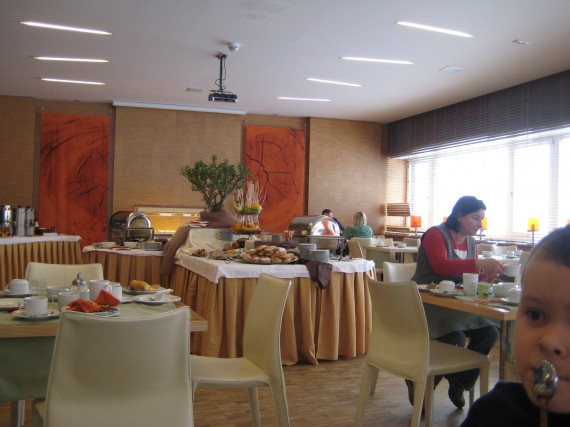 There was also an a la carte menu available for both lunch and dinner. When we stayed at the hotel, there was a choice of 5 starters such as Foie Gras Terrine with Truffles (250 CZK) or Sauteed Scalopp with Curry Mousse and Mango-Chilli Marmalade (190 CZK). For the mains, there was Coq Au Vin Rouge (360 CZK) or the Young Argentinean Beef Platter (490 CZK). If you prefer something a bit more simple then do take advantage of one of the numerous eating establishments that are scattered all around town. 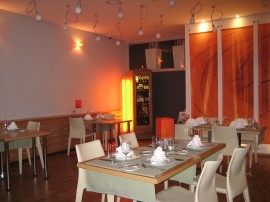 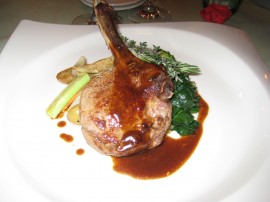 The hotel’s children’s menu included a choice of 5 mains (pizza, chicken, burgers, fish fingers and spaghetti), with a cost of 80 CZK per portion. For dessert there was chocolate, strawberry and vanilla ice creams and crapes with Nutella, all priced at 60 CZK per portion. I found the staff to be very friendly and accommodating towards me as well as the children. 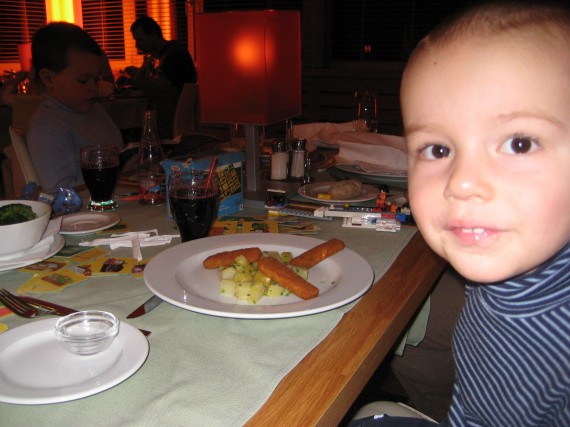 If you get sick of skiing or spending time at your hotel, you might want to explore the shops and surrounds of the charming little town of Janske Lazne. Should you find yourself here in the middle of summer, then you can enjoy some mountain biking, walking at one of the many specially marked tracks, golf, cycling, paragliding, horseback riding, rock climbing or rafting. 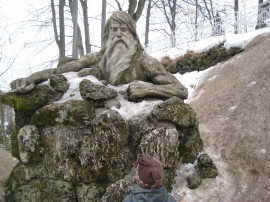 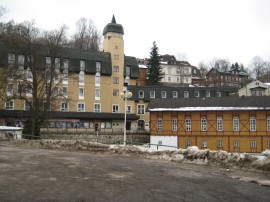 INFORMATION ON JANSKE LAZNE: http://www.janskelazne.cz (information on where to stay, ski etc)