Indoor Playgrounds on 17 November 2008 by Darina

A brand new TIME OUT Indoor Playground has just opened in Prague 4. It is located inside the relatively new (2006) Novodvorska Plaza shopping mall. Styled in an American country-western theme, it enables you to go and check out the shops while leaving your children (aged 3 years and up) in the care of trained baby-sitters. Younger ones are allowed to play too but must remain supervised by their carer at all times. 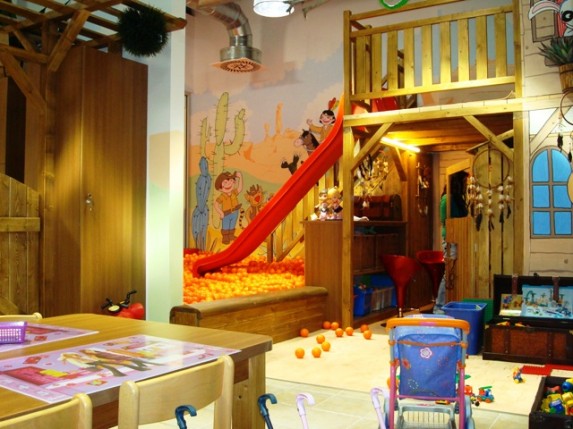 When we arrived there at 11am on a Tuesday morning, it was completely empty and the receptionist complained that since opening its doors 14 days earlier, she had been feeling a bit bored as the numbers had been rather low. She may come to regret having said this as once word of mouth gets around all the mothers will undoubtedly start ‘flooding’ to it soon.

Despite the fact that the official number of children allowed to enter this play area at any one time is 36, by virtue of its size, I would say that with 10, you would already be ‘pushing it’. It is not huge by any means and in order to avoid future disappointment from parents being turned away, the official number of kids allowed to enter should definitely be lowered. 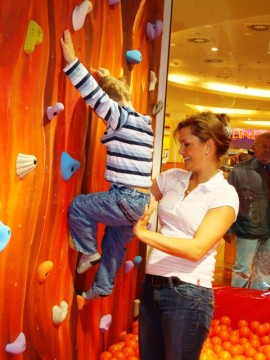 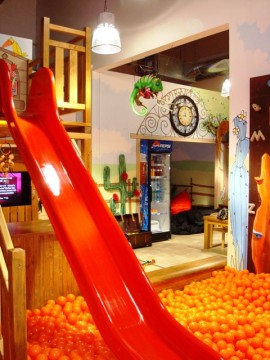 The play area itself is of a good standard but I was disappointed that the ball pool was so full that my boys could barely move around in it. Nicholas threw his usual tantrum after getting stuck and I had to rescue him from this sea of orange every 5 minutes. The large quantity of balls is supposed to offer any free fallers from the nearby climbing wall a safe landing. To date, the only indoor playgrounds with a reasonable quantity of balls in their ball pools for toddlers have been Andel  and Cerny Most . 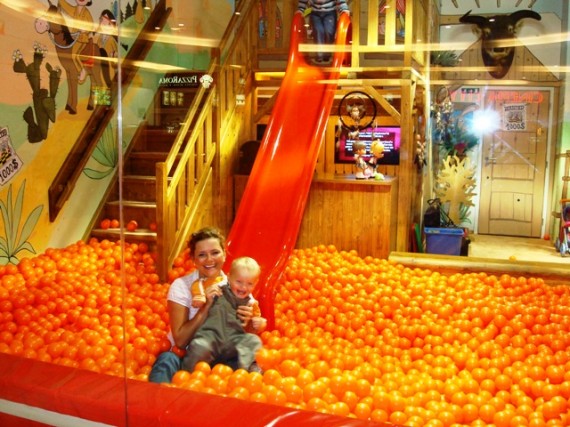 During this visit, my boys totally by-passed the activity table but fell in love with the bean bags in the TV area. Marcus became so comfy that I literally had to drag him away from there. The TV area was separated off from the playing quarters but the whole set-up unfortunately conduced kids to gravitate towards the TV. There were also 2 Play Stations available but both were out of order.

As is the case with all indoor playgrounds offering babysitting, each child needs to be registered first. After that you get a key to your locker. This key then works as your ID (try not to loose it as it costs 250 CZK to replace). Each locker contains an apron with a number and this is what the child has to wear for the duration of their stay. 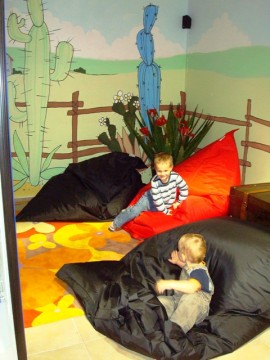 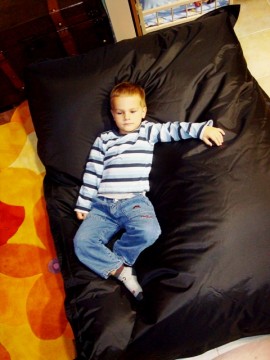 If you plan to eat anything, I would strongly suggest that you bring your own food along, as our experience at the Food Court which is situated directly adjacent to the TIME OUT indoor playground, was rather abysmal. I ordered some chicken pasta for Marcus but the sheer stench of it forced me to take it back. Upon closer inspection it looked a lot like leftovers form last Christmas.

A few 10 CZK coins might come in handy for the carousels and other coin operated toys based withing the Food Court.

!!! ATTENTION !!! All TIME OUT Indoor Playgrounds have a rule that allows children between the ages of 0 - 3 years to only enter during the morning hours (9.00 until 12:00 noon). Strangely enough - I have always been allowed into all of them, even in the afternoon without any trouble, only with the exception of Chodov. I didn’t even know that this this rule existed until we went to Chodov Indoor Playground. Ultimately it’s up to staff to use their own discression when it comes to making admittance decisions.

DIRECTIONS: By Metro and Bus: Red line C to the station Kačerov or line B to the station - Smíchov terminal, Then by bus: 106, 170, 196, 198, 199, 203, 513 to stop Jílovská or Sídliště Novodvorská. By Car: Exit from Jizni spojka (south connection road) in the direction of Krč. At the intersection exit right to Vídeňská Street and drive up the hill passing a Shell petrol station. Turn right to Zalesí Street at the Tomayerś Hospital intersection. Then straight ahead via Zálesí Street up to the OMV petrol station and then right to Novohradská Street. Novohradská Plaza is on the right hand side approx. 1 km ahead.